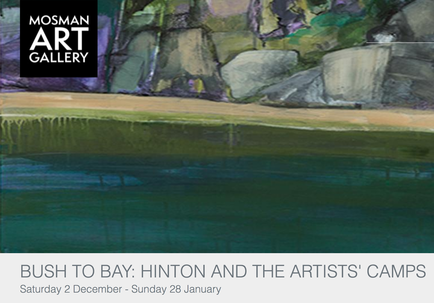 ​​BUSH TO BAY:             2 December 2017 - 28 January 2018
In 1894 the Australian artist Tom Roberts painted what would become known as one of the most important paintings in the artist's oeuvre, Mosman’s Bay. It was created by the artist during his time spent at the Curlew Artist Camp, then situated on the edge of Sirius Cove, Mosman. This iconic Australian painting has now come to symbolise the rich history of the Australian Impressionist movement that developed at the artist camps of Curlew Camp, Sirius Cove in Mosman in the late 19th century along with the Impressionist movement in Heidelberg, Victoria.
It was at Sirius Cove that a young Howard Hinton met and became firm friends with many of these important artists. Hinton began collecting their works and in doing so established one of the most significant private collections of artworks by Australian impressionist painters, now held in the collection of the New England Regional Art Museum.
Now, over 120 years later a collaboration has taken place between a group of contemporary artists from both the New England and Mosman regions, who have responded to Mosman's glorious harbour side location and this significant site in Australian art history. Contemporary artworks by: Gabrielle Collins, Viola Dominello, Ashley Frost, Michelle Hungerford, Angus Nivison, Elouise Roberts, Hadyn Wilson and Ana Young. Historical art works by: Charles Condor, A J Daplyn, Henry Fullwood, Lionel Lindsay, Sydney Long, Francis McComas, Tom Roberts, Arthur Streeton and H.J. Weston.
Bush to Bay: Hinton and the Artists' Camps was a collaborative exhibition developed in partnership between the New England Regional Art Museum and Mosman Art Gallery. The exhibition was originally presented at New England Regional Art Museum from December 2016 to March 2017 and was curated by Sandra McMahon. The exhibition at Mosman Art Gallery was curated by Katrina Cashman.